From December 6th to 9th, I had the opportunity to participate in two separate conferences on two different continents in different capacities. At the University of Edinburgh, I was invited along with U-M Classics professor Nicola Terrenato to give a talk about early Latin society and state formation based on evidence from Gabii, Italy, at the international conference The Dawn of Roman Law. Back in Ann Arbor, the Kelsey Museum was gearing up for Into the Third Century: The Past, Present, and Future of Michigan’s Archaeological Museums, a graduate and undergraduate student symposium sponsored by the Collaborative Archaeology Workgroup in conjunction with the bicentennial exhibition Excavating Archaeology @ U-M: 1817–2017 (which is currently on display at the Kelsey Museum). As one of the graduate student organizers for the event, I felt that I should do everything possible to make sure it went as smoothly as possible.

I arrived in Edinburgh, Scotland, on the morning of December 6, about two hours before the beginning of the conference. What followed was approximately 36 hours of extended presentations on topics ranging from the use of the dative in the Twelve Tables to an Etruscan inscription that may be one of the earliest moments ever found for the culture, of dining on Scottish delicacies as well as quite odd Italian-Scottish fusion, and sleeping the sleep of the jet-lagged. Following our well-received presentation, however, it was necessary to switch gears quickly from presenter-mode to that of an organizer/administrator for the symposium back in Ann Arbor.

Organizing a conference is not easy. One must arrange and purchase meals, airport rides, and hotel rooms for the participants, reserve and set up lecture venues, create schedules, prepare introductions, cajole speakers, clean up, and deal with the inevitable technology issues that will arise. Fortunately, the team of doctoral candidate Kimberly Swisher from Anthropological Archaeology, Kelsey Museum educator Catherine Person, and myself had each other to help spread the load. After an excellent keynote address by Lisa Çakmak (Associate Curator of Ancient Art at Saint Louis Art Museum and IPCAA alumna) on Friday night, Saturday went smoothly with presentations by numerous graduate students from IPCAA, Anthropological Archaeology, and Classics, as well as remarks from the directors of the Kelsey Museum and the Museum of Anthropological Archaeology, Terry Wilfong and Michael Galaty, respectively. At the same time, there were multiple posters presented by undergraduate and graduate students and a technology session where participants could try out the newest technology for presenting archaeological materials to the general public. Overall, although an exhausting couple of days, it could not have gone any better! 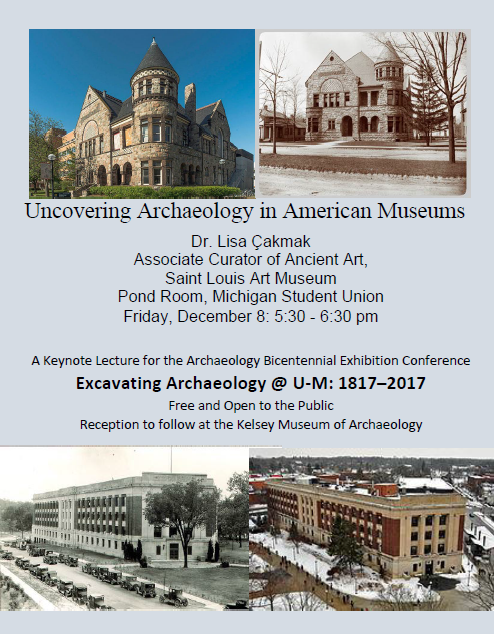