There are four new faces in the corridors of Newberry Hall these days. These are the incoming grad students, hailing from places as far away as New Zealand. Since they’re likely to be our friends and colleagues for quite some time, we thought we’d dive right in and get to know them a little better.

Between orientation, classes, homework, and extracurricular activities, as well as the million other things new students deal with when they arrive at U-M, they’ve hardly had time to breathe, but they have very kindly taken a few moments to answer the pesky questions of a curious editor.

So, without further ado, let us introduce Theo Nash and Alex Moskowitz. 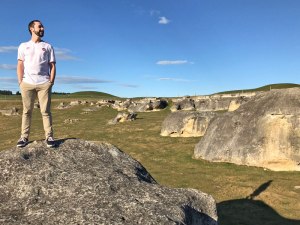 A lifelong fascination with ancient ruins led Theo Nash to study Classics, earning First Class Honours for his Bachelor’s degree and a Master of Arts with Distinction at Victoria University of Wellington in New Zealand. His research so far has been focussed on the Mycenaeans and their broader contexts, starting with his Honours thesis where he explored the creation of identity during the early Mycenaean period. In his MA he argued that the Mycenaean presence at Knossos during Late Minoan II was a precipitating factor in the emergence of palatial culture on the mainland, with a special focus on the contemporary development of Linear B and the contexts in which new scripts are created. He hopes to ask further questions of how scripts develop and spread, both at the palaeographic level and in their broader societal contexts. His other interests include the development of early Greek hexameter poetry and Attic vase painting.

How did you get interested in studying the ancient world?
Living in Germany as a child, I became fascinated with ruins; the rest is history (or, perhaps, archaeology).

What is your favorite thing about studying the ancient world?
That there were people, just like us, who lived what is really an incomprehensibly long time ago. Seeing traces of their life, like a thumbprint impressed on a vase before it was fired, bridges that gap with an immediacy and force that I find incredible.

What is something you think everyone should know about the ancient world?
There seems to be impression among a lot of the people outside academia that Classics is somehow a “solved” field — that because it’s been studied for so long there’s nothing meaningful left to say. But that’s not the case at all. Not only are we frequently making new discoveries, but we continuously find new and better questions to ask of the existing evidence. Far from being antiquated and fusty, it’s an incredibly dynamic and engaging discipline.

What are your career aspirations?
I hope to find myself in a position where I can continue to think about and engage with the Classical world and its relics, whatever that might look like in practical terms.

Who’s your favorite person from history?
The written records of the Mycenaean Greeks unfortunately yield very few personal narratives, but we do know from Hittite records about one Mycenaean named Attarissiya, a military adventurer in what is now Turkey. He appears to have had a personal vendetta against a local potentate, Madduwatta, whom he twice tried to kill for reasons quite unclear. When not distracted by such personal matters, he enjoyed raiding Cyprus. Not the most pleasant fellow, perhaps, but his fragmented CV is a poignant reminder not just of the narratives but also the personalities lost to the ages. 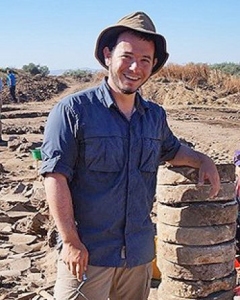 Alex Moskowitz earned a BA in Ancient History with High Honors from Swarthmore College in 2015. His research there focused on modeling processes of cultural contact at the Greek site of Sybaris. In 2017, Alex received his MA in Classical Languages (Greek and Latin emphases) at the University of Georgia. His master’s thesis considered Herodotus’s Histories and focused on the role of colonial narratives in blurring distinctions between Greek and non-Greek identities. Alex has also participated in the Azoria Project in Crete and the Western Argolid Regional Project. Since 2016, he has excavated at Morgantina with the Contrada Agnese Project, most recently serving as an assistant supervisor. Alex’s research investigates economic exchange, migration, and transitions in cultural identity at the periphery of the Iron Age Greek world.

How did you get interested in studying the ancient world?
My interests in the ancient world started when I was a child! I stumbled upon some “Asterix” comics in my cousin’s basement and fell in love with the stories. I spent many hours flipping through the pages and reading about the adventures of this tiny Gaul having adventures in the ancient Mediterranean. While an undergraduate, taking ancient Greek and participating in my first field project in Crete revived those interests from a more academic perspective.

What is your favorite thing about studying the ancient world?
It’s the challenges associated with studying the ancient world that excite me most. Reconstructing an image of what daily life or cultural identity was like over 2,000 years ago with limited evidence is no simple task! But developing new methods to understand that evidence and perceiving patterns that may have been overlooked can be very rewarding.

What is something you think everyone should know about the ancient world?
Something I’ve always thought people should know about both ancient Greece and Rome is that both cultures were, by modern standards, really weird! They were obsessed with auguries, and oracles, and sacrifices. They believed in all sorts of magics and had some really peculiar theories for how human bodies work. We like to think of the Greeks especially as these incredibly wise people, but the reality is much stranger. They made some incredible insights in a lot of disciplines, but their world view was so different from our own and it is easy to forget that.

What are your career aspirations?
After I get my PhD, I would love to continue as an academic. In particular, I would like to find a position at a liberal arts college where I could really focus on teaching in a small-classroom setting.

Who’s your favorite person from history?
From ancient history, specifically, my favorite person is probably Herodotus. He is generally considered to be the founder of “history” as a discipline and I am constantly fascinated by the way he perceives connections and differences between different cultures. His book is a wonderful combination of history, ethnography, and pure fairy tale that is a joy to read not only for its many insights into the ancient world but also because it is remarkably entertaining when you give it a chance.

Thank you, Theo and Alex! Welcome to U-M!